Mission
In the early part of August, 2014 an Emergency meeting was set by the World Health Organization’s (WHO) committee at the direction of Director-General to declare the Ebola outbreak a Public Health Emergency with international concerns. Thus, the World Health Organization has issued several Temporary Recommendation to immediately reduce the risk of the deadly infectious spread internationally.
On September 14, 2014, the General Assembly, the Security Council, and the Secretary-General of United Nations has set forth the motion and voted with majority to establish the UNMEER (United Nations Mission Ebola Emergency Response) the organization is to carry out five objectives, follow six guiding principles and twelve mission critical actions that deemed necessary to contain, stop, and neutralize the Ebola outbreak. Essentially, prevents it from further spread to other African’s nation states, the medical emergencies respond in this case is considered mission critical due to the infectious rapid geographical advance. Three most infected countries in West Africa are Sierra Leone, Liberia, and Guinea.

Ebola virus disease is a fatal illness with death rate of up to 90% after infection. The Ebola virus is also formerly known as Ebola haemorrhagic fever, affects humans and nonhumans primates such as monkeys, gorillas, and chimpanzees. It was first appeared in 1976 in two simultaneous outbreaks, one in a village near Ebola River in Democratic Republic of Congo and in a remote area of Sudan.

We believed that Pteropodidea a type of fruit bat is the likely host of the Ebola virus, Ebola virus is one of today’s five known viruses within the Ebolavirus genus, the virus cause severe and often fatal hemorrahagic fever in humans and other mammals. It is called the Ebola Virus or EVD which became the epidemic in this equatorial part of West African’s regions since the early part of 2013, based on the United Nations’ Epidemiological data we can identified 17,145 cases as of December 03, 2014.

The current outbreak in West Africa is mainly contributed through human-to-human transmission. Through contacts of exposed skin, mucous membranes with blood, other bodily fluids or through secretions (stool, urine, semen) of infected people. The transmittal can also occurs when healthy person come into contact with contaminated environments with Ebola’s patient infectious fluids (soiled, clothing bed linen, or used needles). Healthcare workers treating the disease, family members of infected individuals, mourners, and burial workers are most at risks of infections.  Infected individual exhibits fever, intense weakness, muscle pain, headache and sore throat. These known symptoms tended to follow with vomiting, rash, and failure of internal organs such as kidneys and liver combined with internal and external bleeding.  epidemiological cases indicated that early sign of detection might include low white blood cells and platelet counts and elevated liver enzymes. The incubation period is deemed to be between 2 to 21 days. The patients becomes contagious once the symptoms exhibit. 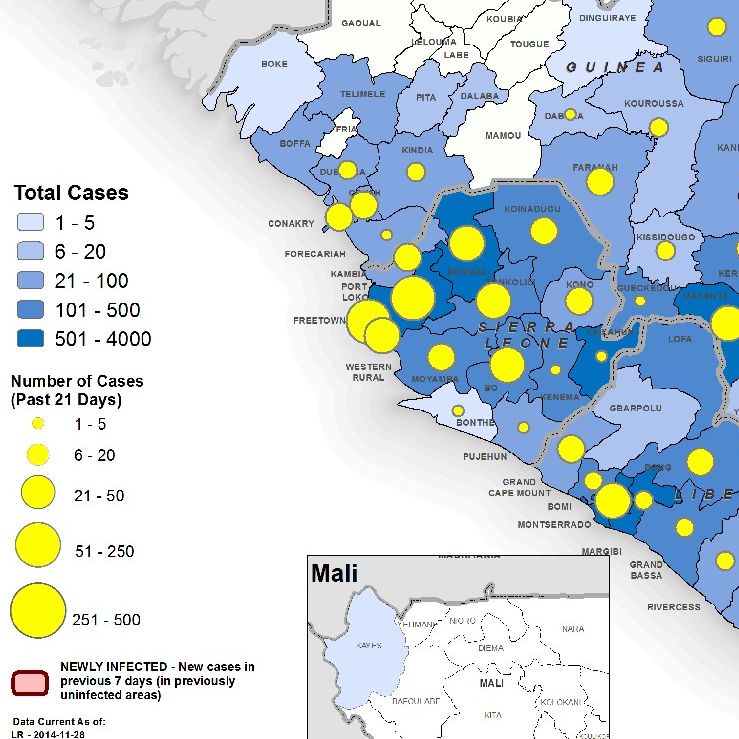